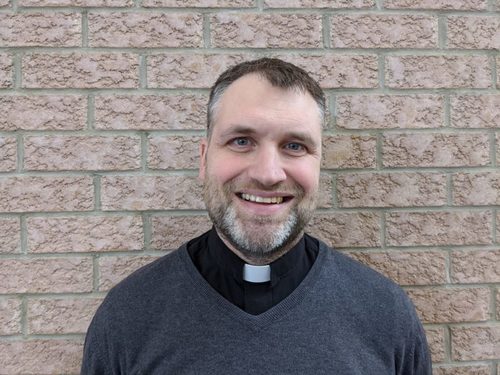 The Reverend Dan Bowyer serves as Associate Priest for Pastoral Care and Outreach Ministries at All Saints'.  Dan was ordained Deacon in the Diocese of Huron in May 2006 and Priest in the Diocese of Huron in November 2006 after graduating from Huron University College with a Bachelor of Arts degree followed by a Master of Divinity degree. He has served parishes in Brantford, Ilderton and Stratford.  Dan has been an Associate of The Order of the Holy Cross (Toronto Priory), an Anglican Monastic Order since 2011. In 2019 Dan discerned a call to Chaplaincy and served as the Chaplain at Trinity Village Care Centre and Studios, a ministry of the Evangelical Lutheran Church in Canada, a Full-Communion partner of the Anglican Church of Canada until 2021.

Dan was first appointed to All Saints' in March 2020.  In September 2021, Bishop Todd Townshend appointed Dan to an expanded role in the parish.  With a heart for pastoral ministry, Dan is excited to be a part of the team at All Saints'.  After engaging in part-time study from 2017, Dan was awarded a graduate degree in Social Work in 2022 from Renison University College at the University of Waterloo and serves as a Social Worker in a Long-Term Care context in concert with his ministry at All Saints'.

Connecting with the wider community has always been an important feature of Dan’s ministry and he enjoys serving as the Chaplain for the Stratford Warriors Junior ‘B’ hockey team of the Greater Ontario Junior Hockey League.  In his spare time, Dan enjoys going for sushi with his wife and following all levels of hockey, Major League Baseball and NFL Football.

Dan has been involved in music writing since the early 2000s.  Some of his favourite bands are Anberlin, Jimmy Eat World and Being as an Ocean.  Dan currently serves as a Canadian Contributor for Spinning Thoughts content provider and podcast on idobi Radio where he writes music reviews and interviews bands.